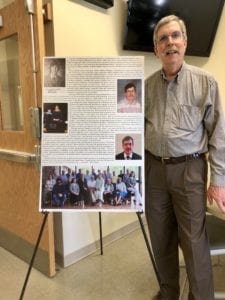 Chris Allgyer hasn’t had a job interview in 46-years. He attributes that fact to his memorable experience interviewing for the position of math instructor at Mountain Empire Community College.

Allgyer, who is originally from Piqua, Ohio, was called for an interview after a position became vacant at the soon-to-open Mountain Empire Community College. He had no idea where Big Stone Gap was at the time. But the AAA Travel Agency provided directions and he set off for what he describes as an “adventure”.

The winding two-lane backroads through Eastern Kentucky and Southwest Virginia prompted a serious case of car sickness. By the time he arrived at the Trail Motel in Big Stone Gap, he was seriously dehydrated and bed-ridden. But Allgyer contends the college was persistent and somewhat desperate. MECC President George Vaughn offered to bring the interview committee to his bedside.

“I was basically flat on my back, sick in the bed in the Trail Motel, and they came to my hotel room to do the interview. I remember they asked me questions like what was my philosophy on community college education. I remember that question particularly because I really didn’t have a good answer. I was deathly sick, just excused myself to the bathroom, came back, and the interview continued.”

Despite his rather unusual introduction to MECC, Allgyer got the job. For the last four decades, he has made MECC his home, marrying his wife Paxton, a “lovely Virginia-girl,” and changing the lives of thousands of students whom he instructed.

This week, Allgyer will close his classroom door, ending 46 years of service with MECC. He is the last of the original faculty members who started at MECC’s opening to retire. Allgyer describes his decision to drive to that remarkable interview in Big Stone as one of the best he’s ever made.

“I was very fortunate to land in Big Stone Gap,” said Allgyer. “When my mother saw the campus, her first thought was ‘My goodness son, they actually pay you to work here’ because it was so pretty with the mountains compared to Western Ohio where it’s all flat.”

“When I came here I thought I’ll stay here and get a few years of experience and then I’ll go back up north. But as I started working here I realized how friendly the people were, how talented they were. They did have a lot of Cincinnati Reds baseball fans and I could listen to the games on the radio. But I think the feeling of what we were doing for the community and the gratefulness of people for the college, gave you a feeling that hey, this is a really good place.”

Allgyer has learned a lot in his tenure as an instructor and can now easily describe his teaching philosophy. He attributes his success to the great mentors and colleagues he has had at MECC, the opportunities he had to continue learning in his profession, and the college’s willingness to implement new and innovative teaching strategies.

“In terms of my philosophy, I think our role is to help students grow and to try to excite them about learning and particularly mathematics,” Allgyer said. “But in general to try to produce people who can learn on their own and continue to learn and appreciate the fact that you are always going to have to learn new things.”

“One thing I liked about being at a community college is that we offer students a chance to grow and we can start with the very basics of arithmetic to meet their needs. I can think of students who started at the lowest level of math and went on to become engineers, teachers, and doctors and such. That’s one of the things I most proud about, In my 46-years I’ve helped students grow and get rewarding work.”

Allgyer practices what he preaches in terms of being a life-long learner. In his retirement, he will stay in Big Stone Gap and will absorb himself in gardening, volunteer service, and his work as a Virginia Master Naturalist, Pro-Art, and the college.

Although Allgyer says he will miss teaching, he is ready for the next chapter. He would advise new instructors to never stop learning because students will continue to evolve and to have fun.  “I’m going to miss working individually with students and seeing their success. I won’t miss the grading, papers, and committee work that we do. But I’ll be visiting the campus a lot to see my friends. I’ve had a wonderful opportunity here. My advice to new instructors is to share with their colleagues and don’t be afraid to ask for support. Patience is always a good thing. Keep learning new things. And have fun with it, because most of the time, it is a lot of fun.”