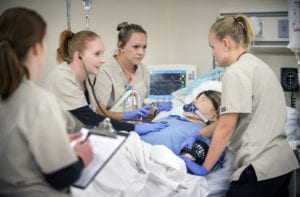 More than 1,200 individuals participated in the “Building for the Future” Campaign, which exceeded the Foundation’s initial fundraising goal by $500,000. College faculty and staff, along with MECC Foundation Board members, celebrated the close of the campaign during an event at the college on Wednesday, November 16.

“The college thanks our generous donors, the campaign’s leaders, and all of the members of the MECC Foundation Board of Directors for making this campaign a success,” stated Dr. Scott Hamilton, President of MECC. “The new opportunities resulting from this campaign are already enhancing our student’s success and their preparation for employment.”

In January 2013, the MECC Foundation Board of Directors launched a $9 million major gifts campaign to secure current and planned gifts for MECC’S strategic priorities, including scholarships, expanded support for student success and outreach programs, and new investment in academic programs that had the potential for diversifying and strengthening the local economy.

Bob Isaac served as Campaign Chair, and Leton H. Harding, Jr. as Vice-Chair.  Nancey Smith, one of the trustees of the C. Bascom Slemp Foundation, was named the campaign’s Honorary Chair.

In 2014, a bequest of $4 million was received from the estate of the late Carol Buchanan that created a new unrestricted endowment. In addition, the C. Bascom Slemp Foundation provided a lead gift of $2 million to create a new unrestricted endowment, leverage other gifts, and help launch the campaign. Almost $6.7M in the gifts or pledges were made for unrestricted purposes.  An additional $2M was given or pledged for scholarships.  Over $50,000 was contributed for student success endowments.

To achieve the goal of increasing investment in academic programs to diversify and strengthen the local economy, the MECC Foundation secured grants from the Appalachian Regional Commission ($100,000) and the Virginia Tobacco Region Revitalization Commission ($442,309) to enable the college to create a health care simulation laboratory.

Wednesday’s celebration included the dedication for the health care simulation lab located in Robb Hall.  The lab will enable health care students in practical and registered nursing, respiratory therapy, physical therapy and other related programs to receive state-of-the art, real-world training in a variety of medical situations. Prior to the simulation lab addition, MECC students were required to travel to more than an hour to Virginia Highlands Community College to complete the same type of training.